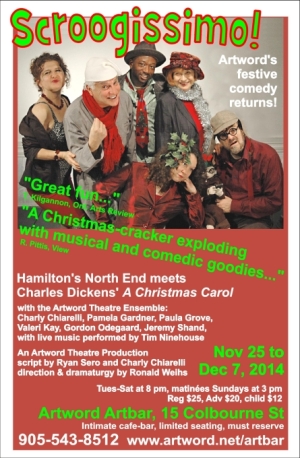 “Artword Theatre is cramming a whack of seasonal fun into their tiny package of a space. Mixing local Sicilian–Canadian storyteller Charly Chiarelli and “Charly” Dickens makes a Christmas–cracker exploding with musical and comedic goodies that will make an addition to your festive season you will never forget….” Robin Pittis, View Magazine (December 12-18, 2013):

“Great fun.” … Review by Tony Kilgannon in Ontario Arts Review, December 8, 2013:
“Charly Chiarelli and Ryan Sero have teamed up to devise Scroogissimo a send-up of the story in a uniquely Hamilton way, at Artword Artbar. …Chiarelli is a Sicilian, from Racalmuto. He is not alone. Hamilton is full of Racalmutese , their numbers and contributions seeming overwhelming considering the small town from which they originate.  Artword Artbar itself sits almost literally in the shadow of the great  three-legged Trinacria symbol on the side of a neighbouring building.
Chiarelli is well-known for mining the comic possibilities in the culture and the accent of Sicilians, and Hamiltonians. With Sero, he has overlaid that pattern onto the great Dickens tale. You can imagine the results; we get words like “umbaggo” (humbug), and lines like “is there-a no prison-a onna Barton-a Street?”.  Because the story and even the lines of the original are so familiar, the send-up works. Even the tender parts of Scrooge’s journey are Sicilianized. When “Scroogi” is transported by the Ghost of Christmas Past, to the triangular island and the town of  Racalmuto of his youth, it is a very sentimental moment. I saw at least one hankie furtively raised to dab the corner of an audience member’s eye.
I’m very fond of the space in Artword Artbar. It seems so low-tech and home-made that productions have a remarkable intimacy. Everything is carried by the performers, with lighting and sets that are minimal and non-distracting.  The cast of Scroogissimo held my interest with strong comic acting and as a powerful musical ensemble. Accompanied by only a keyboard, they performed several Christmas musical numbers including a couple of classic Italian songs. Great fun at a very nice bar with craft beer and wine at reasonable prices.  (Tony Kilgannon, Ontario Arts Review, Dec. 8 2013)

And the full review by Robin Pittis in View Magazine:

The Artword Theatre is cramming a whack of seasonal fun into their tiny package of a space. Mixing local Sicilian–Canadian storyteller Charly Chiarelli and “Charly” Dickens makes a Christmas–cracker exploding with musical and comedic goodies that will make an addition to your festive season you will never forget.

One doesn’t want to overuse the word unmissable, but if this cast keep on like they’re going, this will be the event of the season.

Ebenzu Scrugi is a skinflint with roots in Sicilia and a tightfisted grasp on the Canadian dollars he has earned while struggling from dirt poverty to the upper echelons of Hamilton society. With some help from his couginis, of course… That is, until he is accosted by (you guessed it) the ghost of his dead business partner Jacobo Marley, and three ‘spiritu’s of Natali Past, present and future.

Ron Weihs and Judith Sandiford (the Mr. and Mrs Fezziwig of James North), dispense artistic delights all year round, but they’ve really laid on a feast of seasonal fireworks to warm us through to the other side of March. The ingenuity displayed in mounting a full musical in a space the size of a one per–centers walk–in closet is a wonder to behold.

You really can’t go wrong with the irrepressible Chiarelli as Scrooge. The man is a raconteur born and bred, and anchors this piece with essential charm and humour.

It’s essential because, let’s face it, the Christmas Carol is kind of like a well–loved stuffed toy — so many generations of writers have adapted, re–written, changed locals, and otherwise mucked with Charles Dickens’ beautiful and moving prose novel, that yet another rendition threatens to burst the seams and let the stuffing out.

Thankfully this is too seasoned an artistic team, with too deep a well of talent to go far wrong. While the cast certainly slept soundly after last Saturday’s comedic and musical marathon, the audience got every penny of the ticket price.

Weihs, Sandiford, and Chiarelli are an artist team that have worked together successfully for more years than they will likely admit to, and their sensibilities interweave beautifully, as always, here, and they’ve blended seamlessly into the Hamilton scene.

A new addition to the Artword team this time out is playwright Ryan Sero, who delights in absurdity and corn-ball word play with the banter and rhythm of Vaudeville. There are quite a few groaners in the mix here, but lots of very very funny character work, and a great many subverted expectations, which is a huge blessing. You wouldn’t think this story could be retold again, and kept fresh, but this team does a fine job, and you won’t regret investing your time.

Gordon Odegaard’s simultaneous playing of Bob Cratchit and Tiny Tim almost steals the show – and stealing a show from Charly Chiarelli is a little like knocking over a Swiss bank. You wouldn’t think anyone could steal what has already been stolen, but this straight–man and ventriloquist dummy shtick puts this show over the top, into don’t miss it success.

Newer Artwordians Jeremy Shand, as Jacobo and many essential Character Parts, is a key workhorse without whom this show simply could not go on, and likewise keyboardist Jennifer Lockman carries immense weight in this massively ambitious show for a tiny company.

Don’t think this is just hilarity and diversion. It is, absolutely, diverting, but so importantly for this show, the spirit of the Christmas Carol isn’t drowned by the frivolity or meaningless festivity. Scrugi’s Sicilian past is beautiful but hard, and the Children of Christmas Present are given their due.

Everyone onstage is having a lot of fun here, and you will too. At twenty five bucks a ticket, you’re getting a steal. In fact, you may feel guilty you paid so little. The Artword is to theatre, what Joss Whedon’s Firefly was to Science Fiction; Beautiful, brave and independent… and always flying on the edge.

Remember to bring your carolling voice, because the more you put in to this show the more you get out of it. Like any community, really. And that’s really what the season is about, isn’t it?

July 17 to 27, 2014. Artword Theatre presents Stuart Laughton’s “Trumpet Romance: a wild journey in search of music“ at the 2014 Hamilton Fringe Theatre Festival, at our Bring-Your-Own-Venue: Artword Artbar, 15 Colbourne Street.
Trumpet Romance: a wild journey in search of music is written and performed by Stuart Laughton with an array of musical instruments including trumpet, guitar, harmonica, piano. The show is directed by Ronald Weihs, who also did the script development, and produced by Artword Theatre.  Stuart Laughton picked up a trumpet when he was nine, and it was love at first breath. He began a stellar classical career: Canadian Brass at age 19 and La Scala orchestra at 23. But the siren call of B.B. King’s guitar took him on a wild musical journey, playing roots music in Porkbelly Futures, until it all came together by a lake in Haliburton in R. Murray Schafer’s And Wolf Shall Inherit the Moon.  For more about Stuart Laughton: http://www.radiodial.ca/
TICKETS: $10   http://hamiltonfringe.ca/tickets/
The show runs 60 minutes and is suitable for an all-ages general audience.
SHOW TIMES:
Thu July 17 8:00 pm (Opening), Sat July 19 7:00 pm, Sun July 20 4:00 pm, Tues July 22 8:00 pm,
Wed July 23 7:00 pm, Fri July 25 7:00 pm, Sat July 26 9:00 pm, Sun July 27 6:00 pm (final show) 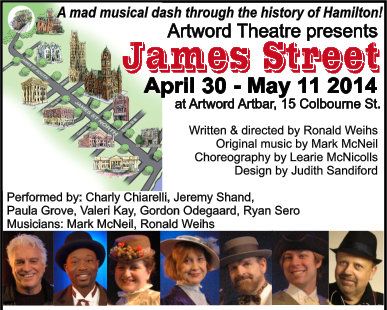 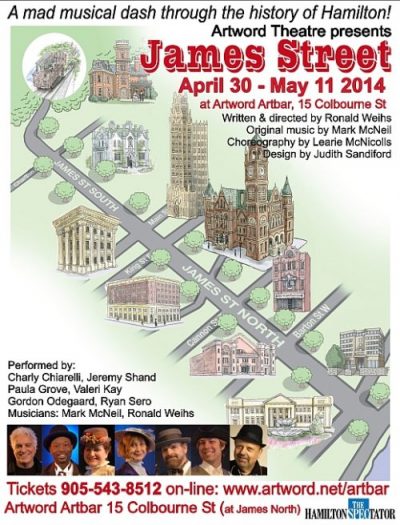 Review May 02, 2014 by Gary Smith for the Hamilton Spectator 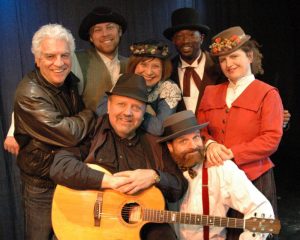 Musical soul to a treasured time

If you missed Greenwich Village in the early ’60s, when The Café Bizarre and The Village Gate were the in-places to go, don’t worry. You can find it all again, just off Hamilton’s James Street. The cigarette haze is gone. No one’s doing drugs at the corner table. The chairs aren’t battered and broken. Otherwise things look very much the same.

Walk into the Colbourne Street Artbar and you enter a world that evokes the past. Right now, there’s a delightful little show being performed by Artword Theatre. Happily, it provides a lusty connection with Hamilton’s past. It’s called James Street, and it pays homage to a neighbourhood that’s just evolved and evolved.

The show, however, is much more than that. It’s a love song to Hamilton, the good, the bad and everything in-between.

James Street is a roller-coaster ride to the past. Anyone over a certain age will smile at the memory of the old popcorn seller on the corner with his gaily painted cart. They’ll smile at the remembrance of the Green Room in Eaton’s, where cherry pie was featured on the menu. There are the trolleys and the street cars that took passengers up and down our main streets, more romantic I think than any LRT.

Ron Weih’s delightful patchwork of a script offers a conduit to the past. There are wild recollections of our infamous crime “stars,” Evelyn Dick and Rocco Perri. And there are moments of political power with the formation of the union movement and recollections of the Underground Railway.

McNeil’s music, played by the composer himself on guitar and ukulele, helped by Weihs on fiddle and guitar and Charly Chiarelli on harmonica, is the show’s heart and soul.

With McNeil and the cast furnishing energetic vocals, this James Street score ought to be captured on disc so we can enjoy it again at home.

Some of the little snippets that make up Weihs’ script are better than others. No surprise there. It’s no secret James Street works best when it isn’t trying to teach us a history lesson.

No matter, you’ll love the banter between 1840 Town Crier Jeremy Shand and Chiarelli’s 2014 street dude. You’ll have fun watching Paula Grove rock her socks off with Gordon Odegaard in Rocco and Bessie. You’ll be charmed by everything Ryan Sero does, changing characters with the donning, or the doffing, of a hat.

You’ll love the way Valeri Kay’s eyes light up every time she takes a dance step. And when McNeil sings Private Riley, a haunting folk ballad about the waste of war, you’d better have a hanky.

Learie McNicholls’ choreography is a little on the hop, stamp and kick side. And not all cast members look comfortable doing it.

What matters most though, is this James Street is a funny, fuzzy valentine to Hamilton. Go see it and reclaim some touching and funny moments.

Gary Smith has written about theatre and dance for The Hamilton Spectator for more than 30 years.