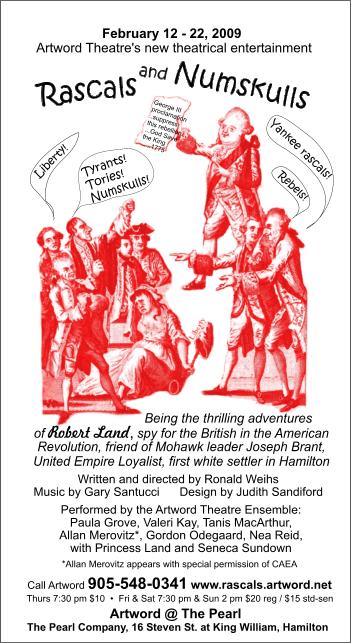 The show is written and directed by Ronald Weihs, designed by Judith Sandiford, and performed by a cast of eight, the Artword Theatre Ensemble. The production runs February 12 to 22, 2009, Thursday to Saturday at 7:30 pm and Sunday at 2:00 pm, at The Pearl Company, 16 Steven Street, Hamilton. To reserve, call Artword at 905-548-0341.

Robert Land was a secret agent for the British army in the American Revolution. Captured and condemned to death, he escaped the hangman and fought in Joseph Brant’s guerrilla army, Brant’s Volunteers. Phoebe Land fought an equally courageous battle protecting her family in the midst of a terrible civil war. It’s a story of heroism and endurance by ordinary people caught in a clash of empires. 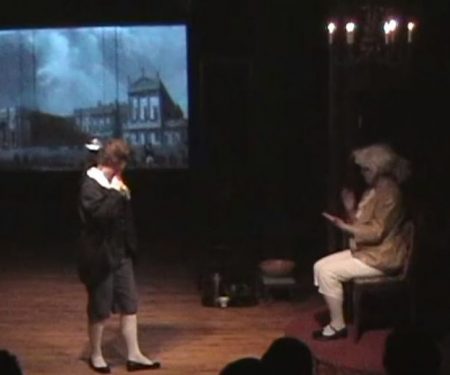 The “Rascals and Numskulls” of the play’s title are the American and British leaders. The pompous and arrogant leaders are presented in comedy style. Our Rascals are John Hancock, Benjamin Franklin, George Washington and Thomas Jefferson. On the other side, our Numskulls are King George III and Prime Minister Lord North. (The words – and spelling – are typical of the vigorous insults of the time.)

Artword Theatre is the resident theatre company (2008-2009) at The Pearl, on Steven Street at King William, in the Landsdale area of Hamilton. Recently transplanted from Toronto, Artword Theatre has formed an alliance with Gary Santucci and Barbara Milne of The Pearl Company in their effort to revitalize the area through the arts.

The Landsdale neighbourhood is named after Robert Land. “When we dug into the story of Robert Land, we became fascinated,” explains Artistic Director Ronald Weihs. “What a tale. It has everything – pioneering on the frontier, war, spies, vigilante vengeance, death sentences, narrow escapes, refugee hardships, evacuations and starting over, long-lost family rediscoveries – and the revolt of the Thirteen Colonies in America against Britain.”

Judith Sandiford, Artword’s resident designer, did extensive research into the American Revolution. “There are a lot of contemporary parallels”, she declares. “Britain had the greatest army in the world, and they thought they could simply ‘shock and awe’ the rebels. They discovered that it was not so easy.”

In the midst of this is the related story of the Six Nations Confederacy of upstate New York. When Britain lost the war, the British promise that all land west of the Appalachian divide would be Aboriginal land forever was also lost. Mohawk leader Joseph Brant fought for the British, and in return was granted the Haldimand tract along the Grand River. The implications of this relocation of the Six Nations is still an issue today. 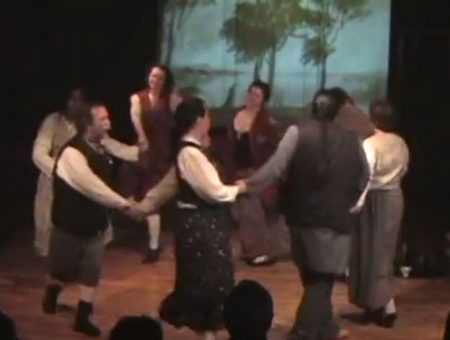 Rascals and Numskulls is performed by the Artword Theatre Ensemble, the six actors who performed in Artword Theatre’s hit production last fall You Are What You Do. Paula Grove, Valeri Kay, Tanis MacArthur, Allan Merovitz, Gordon Odegaard and Nea Reid, plus Princess Land and Seneca Sundown.

Some brief history: Robert and Phoebe Land settled on the Pennsylvania frontier in 1757, in the town of Cushetunk. They homesteaded and raised a family of eight. When the war broke out, Robert Land remained loyal to Britain (a Tory) and became a secret agent for the British army. Meanwhile when their home was burned to the ground by Patriots, Phoebe Land fled with her children to New York City, along with thousands of refugees. Transported to New Brunswick after the war in 1783, Phoebe eventually made her way to the Head of the Lake in Upper Canada, where she she is reunited with her long-lost husband, who was living near where Barton and Leeming Streets in Hamilton are today.

Gary Santucci (guitarist, banjo player, composer) is co-owner of The Pearl Company and is well-known for his world-beat music group Zarabanda. Ronald Weihs (playwright, director, fiddler) is Artistic Director of Artword Theatre with many writing and directing credits. Judith Sandiford (artist and designer) is Managing Director of Artword Theatre and designer of all Artword’s shows.

Background: Artword Theatre’s season 2008-2009
Rascals and Numskulls is the second of four productions for the 2008-2009 “Artword @ The Pearl” season. You Are What You Do, an original musical by Ronald Weihs celebrating the lives of working people, launched the season in October 2008 to rave reviews and remounted in December. From March 25 to April 5, 2009, Artword presents Charly Chiarelli’s new show Sunamabeach, the latest in the continuing saga of a Sicilian in Hamilton (following Cu’Fu? and Mangiacake, which originated at Artword Theatre in Toronto, also directed by Ronald Weihs). Tobacco Troubadour, a new play based on the songs and stories of J.P. Riemens (of J.P.Riemens and The Barflies), about growing up in Ontario’s tobacco country and its lively dance hall scene, is scheduled for April 16 to 26, 2009.

Artword Theatre, the creative team of director Ronald Weihs and designer Judith Sandiford, has been producing original theatre since 1993. Until 2006, Weihs and Sandiford operated a facility (Artword Theatre and Artword Gallery) in downtown Toronto, when their theatre was closed to make way for a condo. After 12 years in downtown Toronto, Artword has pulled up stakes, moved to Hamilton and teamed up with Gary Santucci and Barbara Milne at The Pearl Company.