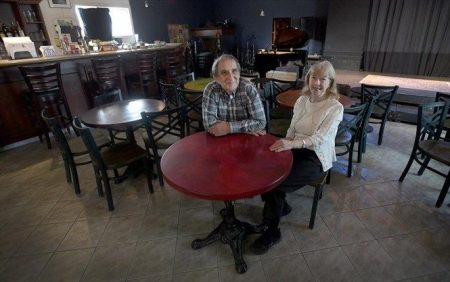 Yes, the facility at 15 Colbourne Street is now closed, and Artword Artbar is no more.

The building changed hands on December 5, 2019. But Ronald  Weihs and Judith Sandiford are working on plans for theatre projects for 2020.

For 10 years, the bohemian-styled ‘listening room’ was part of the arts revival of James that’s moved into a new phase with rising property costs. The closing of one of the pillars of the arts and cultural revitalization of James Street North is being viewed as part of a shifting landscape driven by changing economics.
Artword Artbar owners Ron Weihs and Judith Sandiford say that after a decade of running the performance space on Colbourne Street, just around the corner from James, they feel it’s time to move on.
They sold the building, Weihs says, for a “fair price” in the “the most painless real estate transaction ever.” The closing takes place Dec. 5.
A real estate agent made a cold call in June saying he had an interested client who had been searching to find a building to house his architectural design studio.
“Ten years is a long time,” says Weihs. “We had been thinking lately that we would be winding down in a year or two, to try something new.”
The sale happens at a time when the area is moving into a new phase in which low-commerce artistic endeavours are becoming incompatible with new realities. While the street is set for the colossal Supercrawl celebration of music on James from Sept. 13 to 15, the smaller galleries and arts spots that laid the artistic groundwork of the street’s revitalization are vanishing.
Property values have doubled or tripled over the last 10 years — with rents in some cases quadrupling — making the cost of business much higher and beyond the means of homespun arts-related establishments.
The other main musical performance space in the James Street scene, This Ain’t Hollywood, is listed for sale at $1.89 million. Weihs wouldn’t divulge the selling price of the Artbar.
“James is becoming more of a street of shops and restaurants,” said Weihs. “When we first came, there were quite a few art galleries. But this is a normal progression. We have been part of this three times in different areas of Toronto.”
Especially interesting is how the building on Colbourne so perfectly mirrored what was happening around it. When the bunker-like structure opened in 1984, it was used as an Italian-Canadian social club, reflecting the large numbers of Italians who lived in the area. It eventually morphed into a Portuguese social club.
Amid a burgeoning arts scene, Weihs and Sandiford transformed the property from its ethnic roots into a small performance space for music and theatre with an art gallery in the basement.
And now the building is going the way of professional services office space, something that would have been very unusual a decade ago in that part of town.
“We want to be part of the downtown core. We want to be part of the hustle and bustle,” said Joel Tanner, the owner of SMPL that expects to open in February after renovations. The company specializes in residential design, an area that he says is growing with large numbers of affluent people coming to the city from the GTA willing to pay for major renovations.
Tanner said he had been looking for two years for a place to buy close to James to house the company’s nine employees.
Actor and storyteller Charly Chiarelli, who grew up in the North End of Hamilton and has been a frequent performer at the Artbar, says it’s unfortunate to see the grassroots arts leaving James.
“It’s the artists who create the buzz, the effervescence in the area. But it becomes a sabotage onto themselves by making the area popular and increasing the economic value of the area,” he says.
“I think it was a defining moment when Ron and Judith came to town off James Street, and I think it is a defining moment now that they are leaving.”
Weihs and Sandiford came to Hamilton a decade ago after their rented Artword Theatre on Portland Street in Toronto was sold to a condo developer.
They looked all over the GTA, but could find nothing that was suitable.
“We were in Mimico looking at a horrible building and we were told there was a place in Hamilton. We said, ‘How do you get there?’ So we drove to Hamilton.”
Over its 10-year existence, the Artbar became a hub for artists to develop their skills and for audiences to experience a wide range of music, theatre and dance. Weihs and Sandiford did much to develop local talent and build audiences.
Spectator theatre critic Gary Smith once wrote, “If you missed Greenwich Village in the early ’60s, when the Café Bizarre and the Village Gate were the ‘in’ places to go, don’t worry. You can find it all again, just off Hamilton’s James Street.”
Ron Corsini, a one-time city councillor and former James Street North property owner says, “I’m really disappointed to see the Artbar close down. The changes on James Street are good in one way but really bad and sad in another way.”
“When I was on James Street (as a property owner more than 10 years ago), the buildings were affordable. They were priced right and people could buy them. Businesses could survive paying the rent. It was a different era. Now you might have to pay $5,000 a month in rent.”
For their part, Weihs and Sandiford are upbeat about the future and say they’ll continue to participate in theatrical and musical shows in Hamilton and are currently figuring out the logistics of doing that.
And as Weihs notes: “There are lots of other areas of Hamilton that the arts could help to revitalize.”