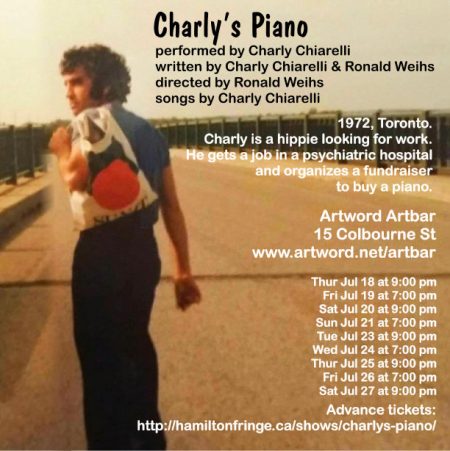 Charly Chiarelli and Ronald Weihs originally developed Charly’s Piano back in December 2017 as a two-act play. In 2019, the Fringe 60-minute time slot offered a challenging opportunity to develop a shorter version. They took out the Christmas carols and tightened up some of the songs. They cut out a few of the anecdotes about the patients that Charly worked with. And there we have it, a fine new version of the show. The projected image sequences are still there for all the songs: 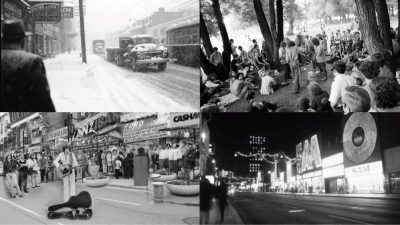 Hamilton favourite Charly Chiarelli brings back his wonderful remembrance of falling in love with music as a young hippie on the streets of Toronto. He takes us inside his complex world as he organizes a concert for patients and doctors in a psychiatric hospital. A warm, touching 60-minute show by Chiarelli and Ron Weihs that provokes laughter and more than a few tears.

Charly’s Piano is the interesting, inspiring and funny true story about Charly Chiarelli’s time working in a psychiatric hospital in 1972. This version of the story is terrific, with direction and background guitar by Artword Artbar’s own Ronald Weihs and black-and-white photos of Toronto projected on the back of the stage.

Charly is an animated and expressive storyteller who plays a mean harmonica. This show features Charly acting out many of the people he met when he worked at the Clark Institute. The story is packed with Charly’s self-deprecating humour and his open-hearted acceptance of quirky characters, and conveys a good-natured feeling of “hey, we’re all in this together, trying to figure it out as best we can.”

It also has a healthy dose of “fake it till you make it” when Charly organizes a variety show fundraiser to buy a piano for some informal music therapy.

Charly’s story ends on a rather sad note, when Charly goes back to visit the hospital several years later. It is a powerful ending, but Yours truly – ever the optimist – hopes the future is brighter for music therapy in psychiatric programs. Two recent visits I made to the psychiatric departments at St. Joseph’s give me faith that there is reason to hope.

This is a show that can inspire mental health professionals – and advocates like myself – to see how important music therapy is. In the meantime, go see Charly’s Piano, for wonderful stories and music guaranteed to make you feel better!

Charly’s Piano is a charming true story of empathy and compassion, set in early-1970s Toronto. The protagonist and storyteller, Charly Chiarelli, recounts his time at the Clarke Institute of Psychiatry, working as a psychiatric assistant. Throughout the course of the story, Charly gets to know the staff and patients of the institute, forming close bonds with all of them. Each patient is treated like an individual, with the dignity and respect that they rightfully deserve. As a Fringe storyteller, Chiarelli is friendly and energetic, speaking to the audience as though he was having a warm conversation with them. Chiarelli also incorporates live music into his act: he will periodically sing a blues tune and play the harmonica, while Ronald Weihs accompanies him on the acoustic guitar. Charly’s Piano is not just a story: more than anything else, it is an invitation to step into someone else’s shoes. It sheds light on the lives of mental health patients just as much as it recounts Chiarelli’s own life, and it reminds us of the incredible potential for change that one person can have.