Thursday September 28 to Saturday October 7, 2017. Charly Chiarelli‘s classic hit show Cu’Fu? (So Who Did It?), Stories of a Sicilian Family, returns to Hamilton, for a two-week run at Artword Artbar. An Artword Theatre production written and performed by Charly Chiarelli, directed and dramaturged by Ronald Weihs.

Cu’Fu?, the show that made him famous, is Charly’s hilarious and touching tribute to his crazy Sicilian family in the North End of Hamilton. His father’s bewilderment at the automatic record changer, his mother’s uncanny ability to read faces, and the unexpected reaction of both when they discover Charly is smoking “Mario Lanza”, create a portrait that is both affectionate and achingly funny.
Artword Theatre developed this show with Charly back in 1995-96 and presented it five times up to 2002. Now it’s back, in its home town, and home neighbourhood!
Show times: Opening Festitalia Special, Thurs Sept 28, at 8 pm; Fri & Sat Sept 29 & 30, at 8 pm; Sun Oct 1 matinee at 3 pm; Tues-Sat, Oct 3-7, at 8 pm. Tix $20.
+ Two-Show Package: Cu’Fu (Sept 28- Oct 7, 2017) PLUS our new show: Charly’s Piano by Charly Chiarelli (Dec 7-16, 2017). 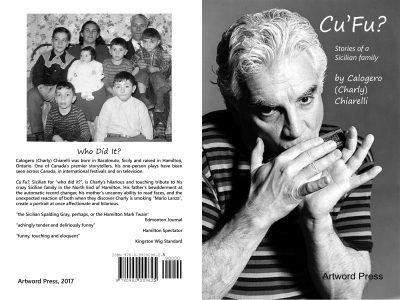 And now, the book!
Cu’Fu? Stories of a Sicilian Family, by Calogero (Charly) Chiarelli, published by
Artword Press, 2017.
The full script plus photos from the family albums. In the back cover family photo, Charly is front row left.

Contact Ronald Weihs, editor, rweihs@artword.net about getting a copy.

The story begins in 1995 in the first version of Artword Theatre, an upstairs studio at 81 Portland St., Toronto:

The start! The Artword Festival of the Human Voice: How many ways to tell a story? 23 performers, 12 events in double-bills, May 24-June 10, 1995. Produced by Artword Theatre (Ronald Weihs, Artistic Director and Judith Sandiford, Managing Director and Lighting Designer)…. [and one of those was] “Cu’Fu?, stories from a Sicilian family, by Calogero (Charly) Chiarelli. (Sun. May 28 at 2 pm, Sat. June 3 at 8 pm, and Sun. June 4 at 2 pm, 1995.) ‘Cu’Fu?’ is a Sicilian response to bad salami or the origin of the universe – and most everything in between. Through storytelling, singing and harmonica playing, Calogero Chiarelli unfolds his Sicilian-Canadian reality full of warmth, tragedy and humour.” 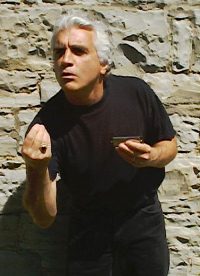 We approached Charly afterwards with the concept that we could help him turn these anecdotes into a full play, and turn him from a storyteller into an actor. He took on the challenge, and he and Ron got to work.

#1. April 11 to 28, 1996 world premiere Cu’Fu? (So who did it?)
A Sicilian’s response to life’s perplexing moments. Written and performed by Calogero (Charly) Chiarelli. Directed by Ronald Weihs. Designed by Judith Sandiford. Judith Sandiford remembers: “This first presentation was a big surprise for us. We had added the words ‘Stories of a Sicilian Family’ to the newspaper listings. And the phone started ringing. People were coming three and four times, bringing a bigger group each time. They were amazed and delighted that we had this very positive story about Sicilians was in such tiny theatre.” The run sold out.

#2. ARTWORD BRINGS BACK HIT SHOW: After a sell-out run in April 1996, and a very warm response from the Sicilian and Italian communities in Toronto, Artword Theatre remounted the show for an extended run beginning September 20 to December 15, 1996. 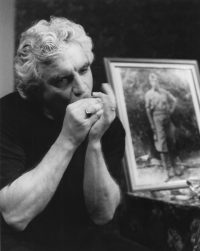 Charly Chiarelli and photo of his father

The one-person show about growing up Sicilian in Hamilton, Ontario has developed a strong grass-roots following that has been filling the tiny 60-seat theatre since September. The show, performed in English with some Sicilian dialogue, has a very strong appeal to first and second generation immigrants to Canada, particularly of Italian and Sicilian background.

On Saturday, November 9, a special one-night performance of Cu’Fu? is opening the Ontario Workers Arts and Heritage Centre in Hamilton, a few blocks from where the play is set.

The author and performer, Calogero (Charly) Chiarelli, grew up in the industrial north end of Hamilton where, in the words of the show, “there are 10,000 Sicilians all from the same town of Racalmuto. And back in Racalmuto, there were only 8,000 left.”

Charly now lives in Kingston, where he works as a social worker. He commutes every weekend to Toronto to do the (1996) show. Charly is an expert blues and jazz harmonica player. His blues songs with Sicilian and English lyrics are a high point of the show.

Artword Theatre, now in its fourth season, is putting its full energy behind the show. “We want to take Cu’Fu?’ as far as it will go,” says Artistic Director Ronald Weihs. “Charly is a very talented writer and performer. And we think that Cu’Fu? has something very important to say about what it is to be Canadian. Right now, that’s the most critical issue we face in this country.”

#3. November 10 to December 18, 1999:  Cu’Fu? Back by popular demand, on the mainstage in the new theatre at 75 Portland! The Artword hit written and performed by Charly (Calogero) Chiarelli, directed by Ronald Weihs, designed by Judith Sandiford.

#4. February 8 to March 4, 2001: Cu’Fu? The hit show that toured the country and played on BRAVO television. Hilarious and touching stories about growing up Sicilian in Hamilton. Written and performed by Charly (Calogero) Chiarelli. directed by Ronald Weihs. Back for a fourth Artword mainstage run,

In 2001, Artword Theatre also premiered Mangiacake! a new show by Charly Chiarelli, directed and dramaturged by Ronald Weihs, designed by Judith Sandiford (remounted in 2002). Charly goes back to Italy and finds out he isn’t as Sicilian as he thought. In fact he’s a Mangiacake! Both shows were were filmed at Artword Theatre for Bravo Television.

#5. October 27 to November 10, 2002: Cu’Fu? (So Who Did It?), Stories of a Sicilian Family, written and performed by Charly Chiarelli, directed by Ronald Weihs, designed by Judith Sandiford. Charly’s hit show, back for the fifth time at Artword by popular demand.