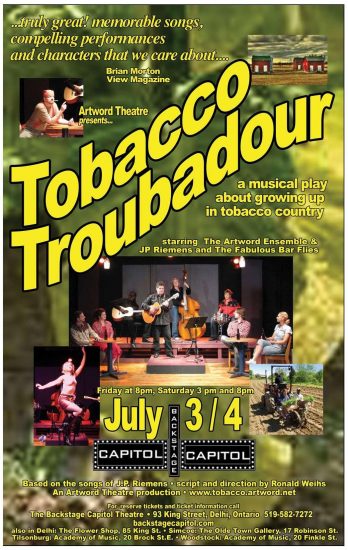 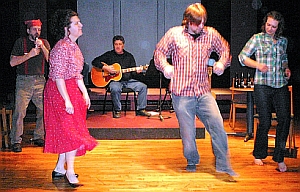 Artword’s new show Tobacco Troubadour, tells the story of a musician in the making, as he grows up in tobacco country. The story weaves in and around a number of songs composed by JP Riemens.
The story is a rich and colourful history of strong-willed individuals with a great capacity for survival – survival with style, pride and a great sense of fun. They worked hard and played hard. The parties on a Saturday night are legendary. 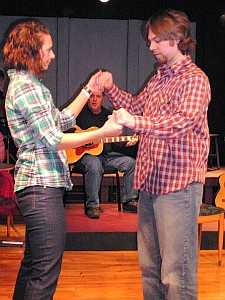 Along tobacco road, back in 63
There was my mom, my dad, my sister and me,
Mama worked the table and daddy worked the land
Sharecropper’s wife and a hard-working man.

Well, my dad played in the local band,
Drums and bass and accordion,
A little bit of fiddle and a guitar too,
And a good-lookin’ singer in a cowboy suit.

It’s oh my, wouldn’t it be nice,
To take a little trip through the pages of time.
Put the cooler in the oldsmobile, come on let’s ride,
It’s a Roosevelt’s Dance Hall Saturday night.

The Tobacco Belt is the area southwest of Brantford, to the north shore of Lake Erie, centered on Norfolk County. Delhi and Tilsonburg are in the heartland of tobacco country. In the 50s and 60s, the cash crop of choice was tobacco. It grew well in the sandy soil here. And the demand for it was high – back then.. 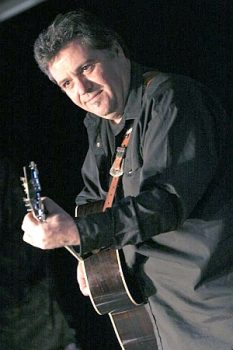 JP Riemens grew up in tobacco country. He was working on a tobacco as a boat-driver when he was 12. He went on in his late teens to become one of the most sought-after kil’ hangers in the area. When the season was on, there was plenty of work. There were the jobs for the kids, jobs for the ladies, the jobs for the daredevils, and the all-night jobs with lots of waiting and beer drinking. There were the factions – the Francophones from Northern Ontario, native people from the nearby Grand River communities, and European immigrants from Belgium, Poland or the Ukraine.

And there was always the music. On a Saturday night, everyone, including the kids whose folks played in the bands, went to the local dance hall. People packed their own coolers in their trucks, left out in the parking lot. There was the Roosevelt Dance Hall in Langton, The Summer Gardens in Port Dover, The Hillcrest Hall in Simcoe, The Highlands in Long Point, The Silver Hill, The Stork Club.

Both JP’s stepfather and his Francophone godfather, Paul Vincent, were musicians. Paul Vincent was leader singer and played lead guitar in a band called The Continentals. His stepfather was an accordion player. The music – it was what JP calls “outlaw music” – was Texas western swing, Bob Wills, Hank Williams, and anything that got them out on the dance floor for the two-step.

JP bought his first guitar, for $15, with some of his early tobacco earnings. He mostly taught himself to play. Since he didn’t have access to many songbooks, he figured he had to make up his own songs, and so he did.

Tobacco Troubadour is a passionate story about hard work and great music, and the willful and wonderful people who did both. As the plot emerges and develops, we see the human cost of the economic decline of the region.

The crop that drove the economy in this area for over 60 years has fallen out of favour, for good reason. The communities that thrived in the tobacco hey-day now struggle to reinvent themselves. But what the farmers are going to do now – that is another story.

For more about J.P. Riemens and his music, visit http://www.jpriemens.com/  and http://www.myspace.com/jpriemens

The fourth show in Artword’s 2008-2009 season in Hamilton is Tobacco Troubadour, a new play based on the songs and stories of J.P. Riemens (of J.P.Riemens and The Barflies), about growing up in Ontario’s tobacco country and its lively dance hall scene. The other shows: Sunamabeach a new show by Charly Chiarelli, an irreverent look at Hamilton, March 25 to April 5, 2009.  Rascals and Numskulls (Feb 12 to 22, 2009), a now original work written and directed by Ronald Weihs, tells the thrilling adventures of Robert Land spy for the British in the American Revolution, friend of Mohawk leader Joseph Brant, United Empire Loyalist, first white settler in Hamilton, performed by the Artword Theatre Ensemble, with music by Gary Santucci. You Are What You Do, an original musical by Ronald Weihs celebrating the lives of working people, launched the season in October 2008 to rave reviews and remounted in December.

Artword Theatre, the creative team of director Ronald Weihs and designer Judith Sandiford, has been producing original theatre since 1993. Until 2006, Weihs and Sandiford operated a facility (Artword Theatre and Artword Gallery) in downtown Toronto, when their theatre was closed to make way for a condo. After 12 years in downtown Toronto, Artword has pulled up stakes and moved to Hamilton in 2007. In 2008 they teamed up with Gary Santucci and Barbara Milne at The Pearl Company.