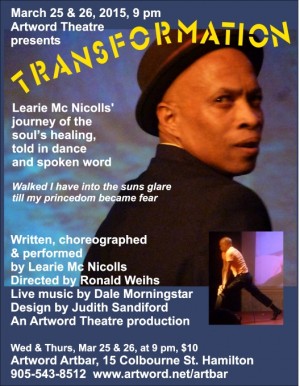 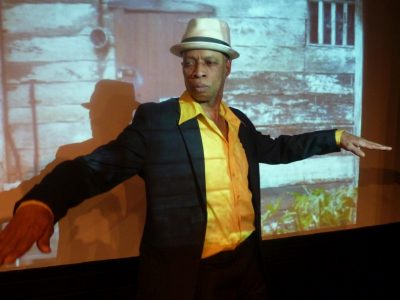 Learie Mc Nicolls confronts the demons of poverty, violence and fear in his powerful new work, Transformation: a Journey of the Soul’s Healing, at Artword Artbar, March 25 and 26, 2015, at 9:00 pm. An Artword Theatre production, directed by Ronald Weihs, Transformation combines dance, spoken word, soundscape and visual images, to present one man’s struggle to come to terms with his troubled Trinidad childhood and redeem the forgotten child inside him. The live musical soundscape is by Dale Morningstar, founder of the experimental blues-rock band, The Dinner is Ruined. Visual design is by Judith Sandiford.

Learie Mc Nicolls has been a key figure in the contemporary dance scene in Toronto since the 1980s. He has danced with Toronto Dance Theatre, Desrosiers Dance Theatre, Dancemakers, the National Ballet of Cuba, and his own company, Mythmakers. As a solo dancer, he has been exploring the combination of dance with spoken word, to create a powerful new form of theatrical presentation.  His Toronto production, Armour, took two Dora awards for Outstanding Choreography and Outstanding Performance.

A year ago, he moved to Hamilton, where he is devoting himself to help build the contemporary dance scene here. In May, 2014, he performed Resurrection at the Pearl Company, and choreographed the dances in Artword Theatre’s second production of James Street. He has created an ongoing series of showcase dance productions at Artword Artbar called Big Dance Little Stage, featuring dancers from Hamilton and Toronto over two nights. There have been four BDLS productions, June, September and November 2014, and February 2015. He has recently opened a dance studio downstairs at Artword Artbar.

Transformation takes the dance/spoken word paradigm to a new level. Ronald Weihs as director, and Judith Sandiford as designer, pushed Learie to incorporate methods based on their approach to theatre. Together, the three of them analyzed Learie’s poems from a theatrical point of view, finding characters and situations that needed to be brought to life. Learie was fine with this, because he is also an actor.

The three collaborators also drew on their experience with Big Dance Little Stage, where Judith Sandiford improvises with projected images and musicians create soundscapes to interact with dancers. It was through BDLS that they became acquainted with Dale Morningstar, who provides improvised music for his wife, dancer Megan English. In addition to his work as a musician, Dale is perhaps best-known as co-founder of The Gas Station Recording Studio, “the hub of the Canadian indie rock sound”, now located at Gibraltar Point on Toronto Island. He and Megan now live in Hamilton.

Review by Louise Noel-Ambrose March 25 2015: “Caribbean theatre at its best right here in ‪#‎HamOnt! Learie Mc Nicolls poetry and choreography conjured up childhood memories of amazing theatre I experienced in my country. It was refreshing to once again experience such a journey through your poetry and dance last night. Encore, Encore, Encore.