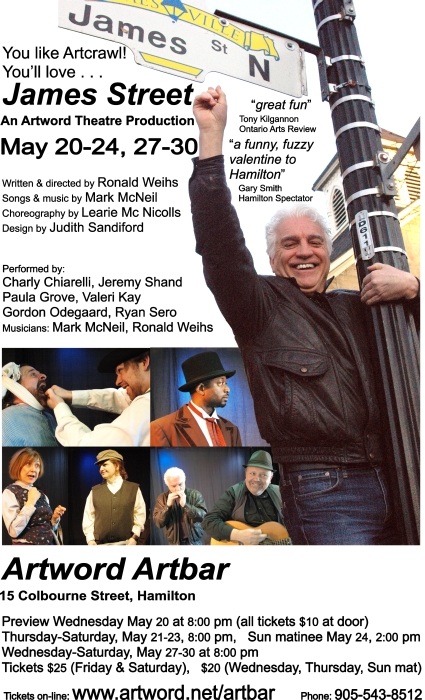 May 20 to 30, 2015. Our hit musical, James Street, is coming back to Artword Artbar, 15 Colbourne Street, just off James! First mounted in 2012, in Artword Theatre’s four-show season at the Lyric, this big, ambitious show was restaged in 2014 to fit into the intimate music venue Artword Artbar. It was a sell-out!
Hamilton`s official Town Crier from 1850 meets a modern Hamiltonian from the North End, right on James Street! 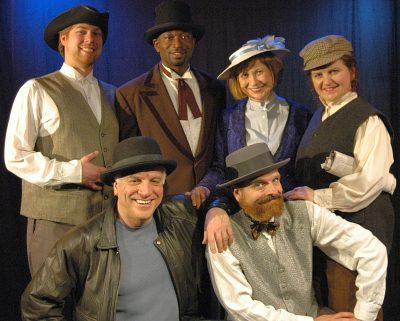 An Artword Theatre production, written and directed by Ronald Weihs, with original music by Mark McNeil and choreography by Learie McNicolls.
Produced and designed by Judith Sandiford.
Music performed by Mark McNeil, Ron Weihs & the Ensemble.

Artword Theatre’s hit musical James Street is coming back to Hamilton. The popular show, a mad musical dash through the history of Hamilton, will be returning to Artword Artbar, May 20 to 30, 2015.

Artword Artbar has been a key player in the revitalization of Hamilton’s downtown. Located at 15 Colbourne Street, half a block west of James Street, the café-bar has been presenting music, theatre and dance in an intimate setting (60 maximum) for over five years.

Written and directed by Ronald Weihs, James Street has a cast of six (plus two musicians), who play multiple roles as Hamilton’s history flashes by. Songs are by Mark McNeil, one of Hamilton’s finest singer-songwriters and a well-known journalist for the Hamilton Spectator. His latest CD, Flashbacks, featuring songs from the show, is nominated for three Hamilton Music Awards.

Choreography is by Learie Mc Nicolls, well known in the Toronto dance scene, who has recently pulled up stakes and moved to The Hammer. Judith Sandiford is both producer and designer.

They see how pioneer dentistry was done, witness George Hamilton and his cronies (Hughson and Durand) plot out the town, watch a farmer advertise for a wife “with a good back”, drop into Billy Carroll’s cigar shop and bookie joint to bet on the first Around the Bay Road Race, and take a ride on the new Electric Railway. They witness the sad demise of Bessie, Queen of the Bootleggers, and the strange fate of Evelyn Dick.

There is a sequence honouring Hamilton’s soldiers through two World Wars. McNeil’s song, “Private Riley”, imagines a universal soldier in the Royal Hamilton Light Infantry (RHLI). The Rileys adopted the song to celebrate their 150th anniversary, and Mark collaborated with the regimental band to produce an award-winning video that received national exposure.

Charly Chiarelli is well known for his widely popular one-man shows about growing up in Hamilton as a Sicilian immigrant. He is just returning from Sicily, where he has been starring in a film production, The Lemon Grove, based partly on his stories.

The idea for James Street arose in 2010, when McNeil was working on a special edition of The Spectator, The Story of James.  Mark suggested to Ronald Weihs and Judith Sandiford that Artword produce an original play, partly based on the first-person stories he was collecting. Ron and Judith ran Artword Theatre in Toronto from 1994 to 2006, creating many original works for theatre, until the condo boom displaced them and they transferred their activities to Hamilton.

“Right now, there’s a delightful little show being performed by Artword Theatre. Happily, it provides a lusty connection with Hamilton’s past. It’s called James Street, and it pays homage to a neighbourhood that’s just evolved and evolved. The show, however, is much more than that. It’s a love song to Hamilton, the good, the bad and everything in-between. An ensemble cast embraces comic and romantic moments, doing robust service to Mark McNeil’s evocative score.”  —Gary Smith, The Hamilton Spectator

Fifteen years ago, Mark McNeil was writing a piece for the Hamilton Spectator, about James Street North where things were not going well. “You know things are rough,” he wrote, “When a street can’t even support its beer store any longer.” Happily, things have turned around on our storied avenue. It now supports, if not a beer store, at least a plethora of restaurants, bars, venues, galleries & shops.
Many years after writing his words of concern, McNeil had the pleasure of writing a longer much more optimistic update, and was delighted with the improvements noticed.

From that came the idea for a play about the ups and downs, the adventures and the characters of James Street North. He partnered with Ron Weihs and the play became a reality, performed at the Lyric Theatre. Now, an updated version, with more songs added, is on view at Artword Artbar, and it’s a keeper. I had the pleasure of seeing it at a very polished preview performance.
Have you ever had the experience of finding a coffee-table book about Hamilton at a friend’s house, or at the library, and falling deeply into the pictures of the remarkable buildings of yesteryear; the classic cars lining the streets, and horses populating pictures of what is clearly your own city? It’s that wondrous feeling that resonates throughout this affectionate but not cloying production.
A Hamilton Town Crier (Jeremy Shand) circa 1840, somehow travels through time and meets with a James Street North denizen -Charly Chiarelli in 2014. Their shared stories about James Street are played out in vignettes by the rest of the cast Paula Grove, Valeri Kay, Gordon Odegaard and Ryan Sero in word, song, and occasionally dance. It’s great fun,with the stories  surprisingly informative (did you know that original settlers were given free land – no taxes? That Hamilton declared bankruptcy in 1866!
The six-person ensemble brings to life several key moments of our city’s history. They show us scheming speculators George Hamilton and James Durand planning to create a town, and buying the support of Nathaniel Hughson by naming streets after his kids, Mary, Rebecca, and of course the aforementioned James. We see the surprising bankruptcy auction; visit some of the grand old shops, ride on a trolley, dance through Gore Park, witness race prejudice acknowledged by the chief of police, and tour the street with a proud immigrant from Sicily.
All this and more is supported by very enjoyable and era-appropriate music written by McNeil (“Jimmy Street”) on guitar and ukulele; Weihs on guitar and fiddle; Chiarelli playing harmonica; and the entire cast sings. An especially lovely musical moment was the Gore Park segment in which the several voices sang a barbershop-quartet-inspired piece.
Hamilton’s ‘Eeyore’ phase has at long last passed. We now have a downtown where people want to be. It’s a lovely fact, and as we continue to embrace and take pride in our present we are able to enjoy, acknowledge and accept our past. This play has the ability to tell our story and to entertain us mightily at the same time. I recommend it to anyone who cares about this city.
Artword Artbar is a great place to see it. It’s an intimate venue, where every seat is a good one. The stage is a comfortable height, and the actors at times inhabit the audience part of the floor as well. The proprietors have an obvious love of their city and make an effort to present and celebrate it in their productions. Their respect for their patrons shows in every detail, from the LED-style stage lighting (to reduce excess heat build-up in the room) to the bright, clean washrooms, to the craft-style beer on tap at reasonable prices, plus a very welcoming vibe. —Tony Kilgannon, Ontario Arts Review, May 2014.