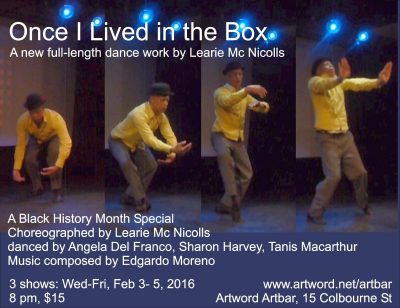 February 3, 4 & 5, 2016, a new full-length dance work Once I Lived in the Box by choreographer Learie Mc Nicolls, for Black History Month.

Learie Mc Nicolls has been a key figure in the contemporary dance scene in Toronto since the 1980s. He has danced with Toronto Dance Theatre, Desrosiers Dance Theatre, Dancemakers, the National Ballet of Cuba, and his own company, Mythmakers. As a solo dancer, he has been exploring the combination of dance with spoken word, to create a powerful new form of theatrical presentation. His Toronto production, Armour, took two Dora awards for Outstanding Choreography and Outstanding Performance. 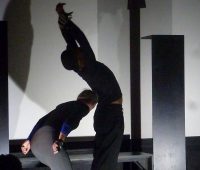 He moved to Hamilton, where he is devoting himself to help build the contemporary dance scene here. In May, 2014, he performed Resurrection at the Pearl Company, and choreographed the dances in Artword Theatre’s second production of James Street. He has created an ongoing series of showcase dance productions at Artword Artbar called Big Dance Little Stage, featuring dancers from Hamilton and Toronto over two nights. He has recently opened a dance rehearsal studio downstairs at Artword Artbar.

Learie Mc Nicolls’ newest creation, Once I Lived in the Box, at Artword Artbar in Hamilton {Feb 3, 4 and 5, 2016], was a powerful, yet intimate, piece of choreography. The dancer and choreographer left Trinidad, in 1974, worked in Vancouver, spent many years dancing with various companies in Toronto but now lives and works in Hamilton. Mc Nicolls’ powerful dance, combined with music, spoken words, and visuals on a screen, was performed with a trio of women dancers: Angela Del Franco, Sharon Harvey, and Tanis Macarthur. Edgardo Moreno’s audio soundscape set the pace with electronic music and recorded blues with electronic modulation.

Direction and lighting were by Judith Sandiford. Four dark-coloured oblong benches served as a moveable set—upright boxes, benches, coffins or gallows—perhaps suggesting the boxes we live in (or under), love, hate, respect, recognize, and escape to discover who we are—boxes society puts us in, boxes we create ourselves. The work explored many questions, in a form of dance that told an “abstract, three-dimensional, emotional” story, in Mc Nicolls’ words.

Mc Nicolls danced the first number alone, wearing a dark suit and hat. From the time he came onstage, his fluid, supple movements captured the audience’s complete attention. His every step was poetry in motion—measured, exquisite motion—which expressed emotion. And he ended the set speaking to the audience.

Then Del Franco, Harvey, and Macarthur danced together in solos and duets, moving in and out or balancing on the boxes, in costumes geared to their individual styles. Del Franco’s poignant solo, danced to Nina Simone’s “Isn’t It a Pity?” was a clear highlight. So was Harvey’s solo, conveying grief, love, and strength, accompanied by Otis Redding’s “A Change Is Gonna Come.” The program noted Harvey’s “passion for the internal/external work of the body.”

Macarthur’s dancing was abstract, with inner grace and wit, and her duet with Mc Nicolls was beautifully touching. Their music was vintage slide guitar and Skip James’ “Hard Time Killin’ Floor Blues.” In the finale, to the Staples Singers “I’ll Take You There,” Macarthur and Harvey danced a more spirited duet, while Del Franco and McNicolls enacted a more subtle interplay.
Sandiford’s lighting used LED lights and theatre gels (blue and red) to create changing moods.

Congratulations to ‘Artword Artbar’ for supporting this wonderful work. Created for Black History month, this piece touched the heart. I hope it will be remounted; it deserves a longer run and a larger audience. Judith Sandiford and Ron Weihs, launched Artword Artbar in 2009, and are the producers of Artword Theatre.