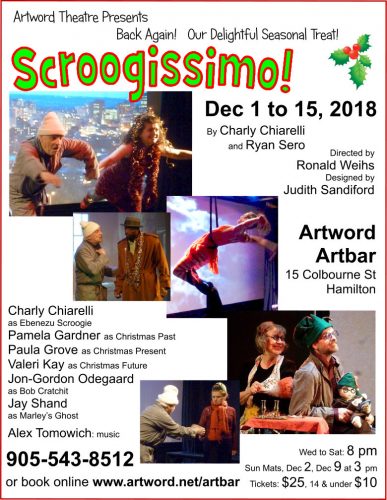 A sell-out hit in 2013, 2014 and 2016, Scroogissimo features Charly as “Ebenezu Scroogie”, a Christmas-hating old Hamiltonian from Racalmuto, Sicily, who finds himself haunted by three ghosts of the Past, Present and Future.
Show Times and Prices: Wed to Sat at 8:00 pm, Sun matinées Dec 2 and Dec 9 at 3:00 pm. Tickets: Adults $25,  Child 14 and under $10.
Our favourite review, from the first production in 2013: “Artword Theatre is cramming a whack of seasonal fun into their tiny package of a space. Mixing local Sicilian–Canadian storyteller Charly Chiarelli and “Charly” Dickens makes a Christmas–cracker exploding with musical and comedic goodies that will make an addition to your festive season you will never forget….” Robin Pittis for View Magazine.   (The show is as much fun and even more, as we add new things each remount.)

Scroogissimo! is delightful and charming

With apologies to Charles Dickens, this Hamilton version of the transformation of a crusty old skinflint to a giving and caring benefactor of humanity, will make you believe in something more than ersatz holiday entertainment.

We’re in Hamilton, where Bob Cratchit (Jon-Gordon Odegaard) and his family live at 487 Barton St. Cratchit scratches out a living in the office chambers of Ebenezer Scrooge a wily old Sicilian played of course by the irrepressible Charly Chiarelli.

As in Dickens, You’ll go with those three spirits of Christmas, Past, Present and Future (Pamela Gardner, Paula Grove and Valeri Kay) as they force the grumpy old miser to confront the waste of his life.

For the purposes of Ryan Sero and Charly Chiarelli’s sometimes hilarious, always touching script, this Scrooge is known as Scroogie.

Dickens, of course, might well roll in his grave if he saw the antics these characters, based on his originals in “A Christmas Carol,” get up to. The thing is though, the story has been given a modern context, a Hamilton location and at least one character that resembles Harpo Marx without harming its heartfelt intent. It all works, you see, in reclaiming an old reprobate and in fostering the same message of kindness, love and generosity at Christmas Dickens, intended.

Charly Chiarelli gives his usual broad, somewhat off the wall performance he is famous for. He has an interesting capacity for not letting us know how much of the text he’s actually speaking and how much of the evening is supported with comic ad-libs and zingers. It doesn’t really matter because whatever he does it works and it would be difficult to imagine this “Scroogissimo!” without his exuberant presence.

The rest of this fine Artword Theatre cast is up to speed, providing ingratiating, charming and artfully comic performances that adhere to Dickens’ original notions, even if they are flying off in other, less Victorian directions.

And fly these character do. Especially Pamela Gardner’s frisky Christmas Past. She takes to the overhead silks in that Cirque de Soleil way and scares the bejeebers out of poor Scroogie before she even confronts him with all those pathetic moments from his past. She has a terrific presence on stage and highlights everything she does with a warm smile that would heat you up on a cold Hamilton night.

Valerie Kay is the horn-tooting Harpo Marx based Spirit of the Future. She shuffles her way along to a little bit of Cole Porter’s “Anything Goes,” (let’s not call it dancing) and she helps rehabilitate the old miser Scrooge with a shake of her exotic gold wig and her relentless honking of a kid’s bicycle horn.

Then there’s the wonderful Paula Grove. Singing a snatch of “Mambo Italiano” she insinuates herself on stage in a mulberry sparkle dress, with ample peeks at her bold cleavage. All decked out in golden Christmas balls, with a poinsettia firmly plopped in her mane of black hair, she’s the bold and brassy Natalia, The Spirit of Christmas Present. And what a present she is. Her turn is the highlight of a show filled with delirious highlights. Don’t miss her.

Jay Shand as Marley’s Ghost has a delightful laid-back quality about him and he fills the stage with a number of characters that give this “Scroogissimo!” a modern and quirky tweet.

Jon-Gordon Odegaard is a remarkable actor who brings such humanity to Bob Cratchit. Every time you see him in an Artword Theatre show he’s totally different. Now that’s a consummate actor.

Judith Sandiford’s projections and Ron Weih’s direction of this neat little show are completely charming. Things are never forced and the innate warmth and sweetness of the piece never fights with the humour, they just coexist.

Major joy of the evening too, is the piano accompaniment of Alex Tomowich, a tall handsome pianist, who looks like he’s having as much fun as the actors on stage. We get snatches of “Theme from The Godfather,” “Over The Rainbow” and a host of Christmas songs and carols interpolated into the proceedings. Look to hear from this guy in the future because he is a real artist on those black and white keys.

“Scroogissimo!” doesn’t pretend to be anything more than a delightful evening of holiday entertainment. It works splendidly in the intimate space at the Artbar and you’d have to be a Scrooge yourself not to be captivated by its endearing charm.

Gary Smith has written on theatre and dance for The Hamilton Spectator for more than 35 years.