“2021 Arts Awards Short List: Lifetime Achievement Award nominees
Judith Sandiford & Ronald Weihs
Judith Sandiford, an artist and designer, and Ronald Weihs, a playwright and director, have been creating original theatre and promoting the arts for thirty years. Their projects include Artword Artists Forum, Artword Theatre, Artword Gallery and Artword Artbar, a welcoming environment for theatre, music, dance and visual art in Hamilton.”
The other nominee in this category is the renowned musician and author Tom Wilson.

“A panel of 45 local artists and arts professionals evaluated 122 public nominations for the 2021 Arts Awards, shortlisting 37 nominees to move forward for final adjudication for an award. Meet them below!
Award recipients in all categories will be announced via online presentations during Hamilton Arts Week (June 3 to 12, 2021).”

https://www.hamilton.ca/city-awards/arts-awards/arts-awards-short-list
“Creator Award (28 shortlisted): Conferred to individual artists and artistic collectives (including bands) working in any artistic discipline and at any career level.
Arts Champion Award (7 shortlisted): Honours the work of arts sector volunteers, advocates, or board members who are essential in supporting success in the arts community.
Lifetime Achievement Award (2 shortlisted): Recognizes those who have contributed substantially to the artistic vitality of the city over the course of a career. 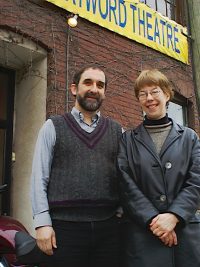 Here are some photos from our various adventures in theatre
(not a whole lifetime, just the bit since 1994). But it does include three facilities for performance, over 26 or so years. 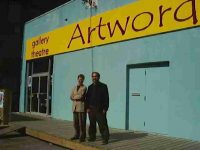 #2. Artword Theatre at 75 Portland Street, Toronto, 1999-2006. Proud of our small-budget high-standard 150-seat theatre, plus art gallery and 60-seat studio theatre. This was a make-over of our landlord’s garment factory.

#4. Out in front of Artword Artbar on Colbourne Street at James, for “Open Streets”, back when street festivals were home-made:
Ron on fiddle, Judith with a microphone, and pals Charly Chiarelli on harmonica and Venesio Salvo on guitar. 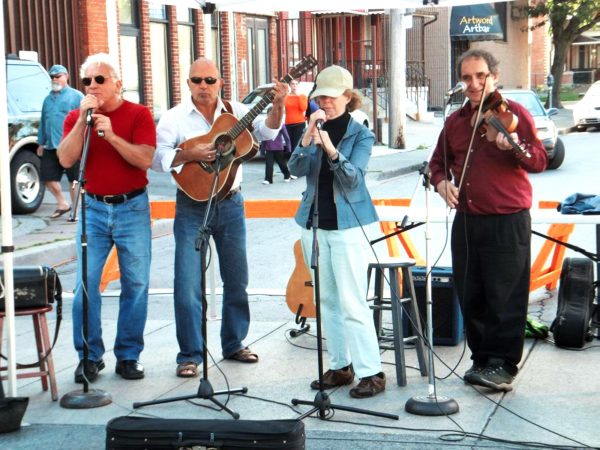 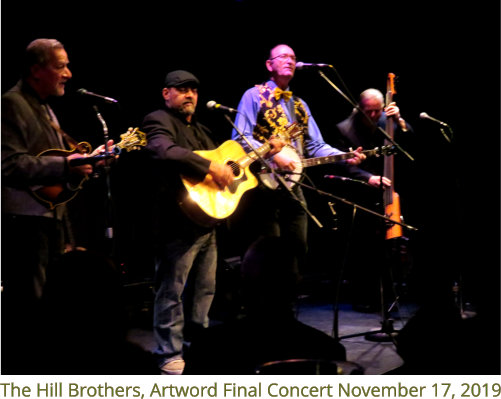 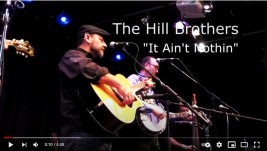 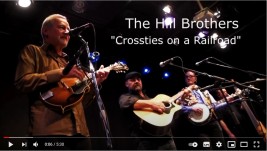 Full videos of the first set and the second set.

Part One: Full video of the first set:  https://youtu.be/itx4vIrk7wQ 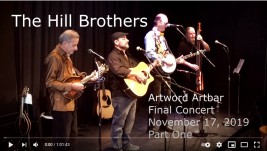 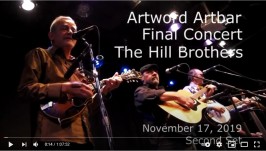 * We’re both working on several projects.
* We mostly stay at home (we’re fine).
* Artword Theatre’s online “Walter” is doing well, many likes and over 500 views.
* Ron is busy acquiring many new skills to create on-line video theatrical projects.
* We’re both paying attention, in different ways, to the strange world we live in now.

Here is a composite image from our poster collection. All the shows have detailed posts on this website. 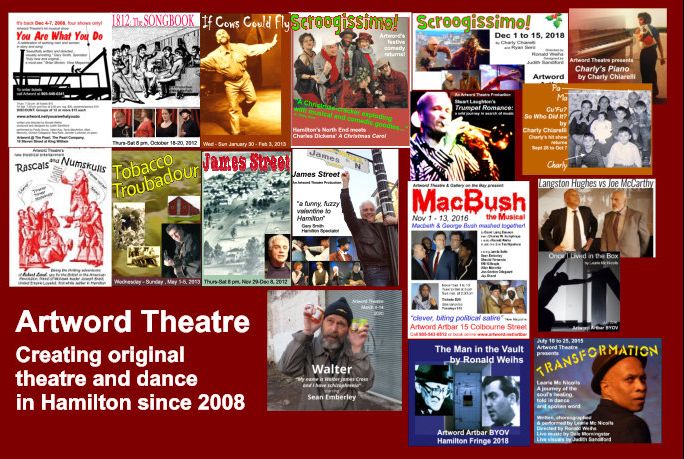 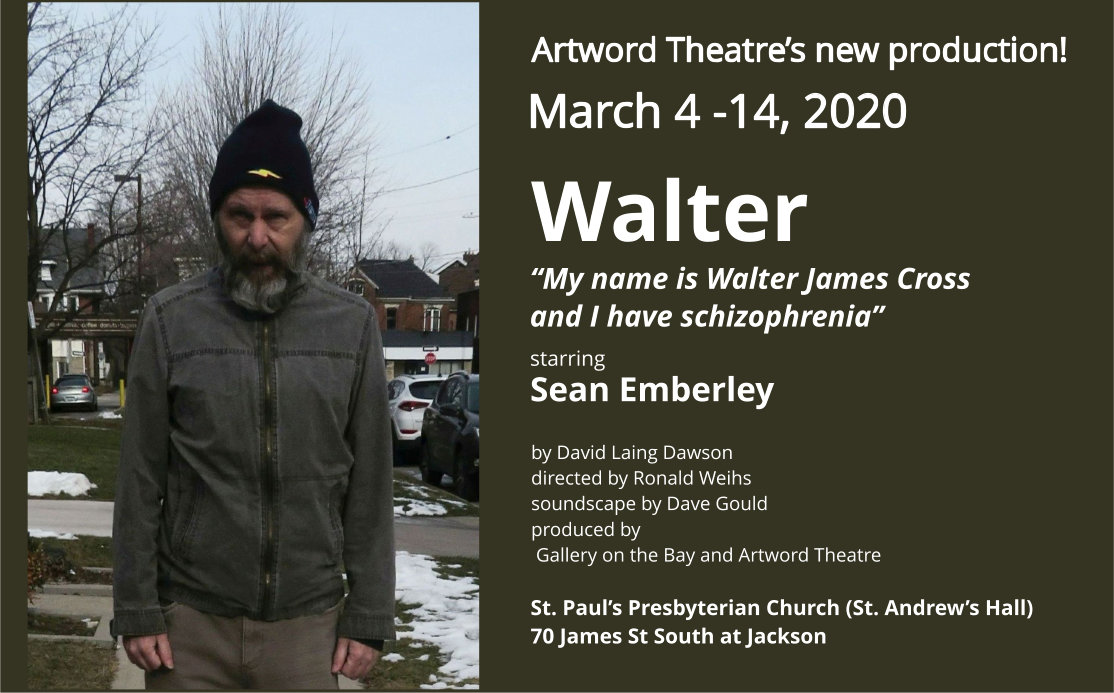 “My name is Walter James Cross, and I have schizophrenia.”

David Laing Dawson (playwright) is a psychiatrist, formerly medical director Hamilton Psychiatric Hospital, the co-owner of Gallery on the Bay and the author of six novels, four non-fiction books, and ten plays. He co-authors a blog on mental health, mental illness, politics and life, on WordPress called Mind You.

Playwright’s Statement about Walter: “Walter James Cross is a fictional character and my invention. Yet I invented nothing he says or has experienced. These are an accumulation, a synthesis, of much of what I have heard from people suffering from schizophrenia over the past 50 years. The suffering is real, the experiences are real, only the form of story telling is invented by author and director.
I first wrote this script as a film, produced and broadcast on TVO almost 20 years ago. Ronald Weihs has re-imagined Walter as a live performance.”  David Dawson, March, 2020.

Director’s Statement: This production initiates a new phase for Artword Theatre. Judith Sandiford and I have been doing theatre together since 1980. In 1993, we started a small theatre called Artword Theatre, and in 2000 we opened a much larger complex with two theatre spaces and an art gallery. We lost that theatre to condo development in 2006. In 2007, we moved to Hamilton, and in 2008-9, we put on four plays at the Pearl Company. In 2009, we started Artword Artbar, and put on plays there for ten glorious years. Then it was time for a change. We sold Artword Artbar and started looking around.
We are delighted to have found St. Andrew’s Hall at St. Paul’s Presbyterian Church. The people here are friendly and accommodating, and the building is a treasure. We’d especially like to thank Rev. Fred Shaffer, David Church, Christina Babcock and Ruparian “Syd” Sydney for making us feel at home.
We have begun an informal ongoing collaboration with David and Marlaise Dawson, of Gallery on the Bay. Walter is the third play by David that I have directed, and there is a new musical in the works for the fall. Stay tuned.                 Ronald Weihs, March, 2020 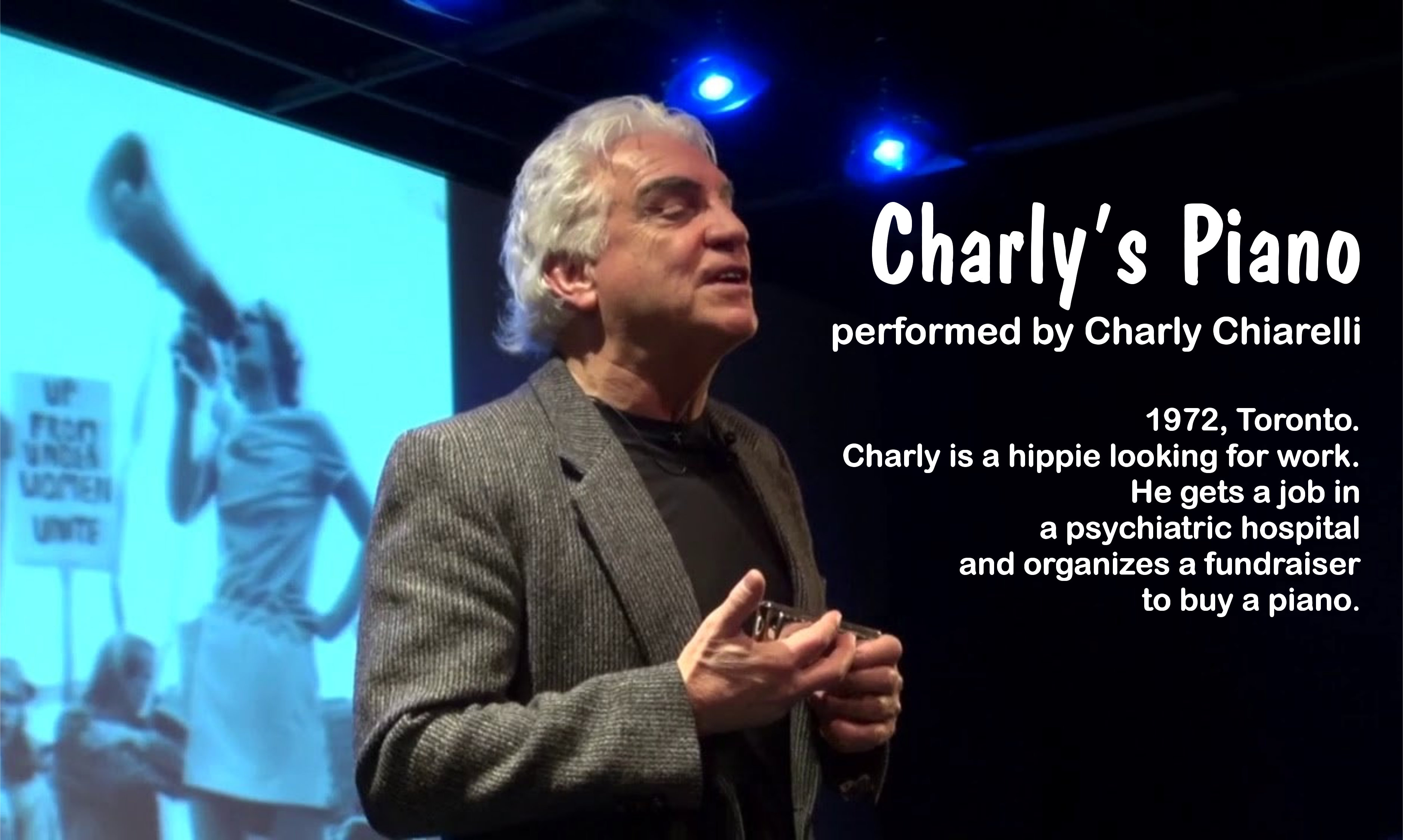 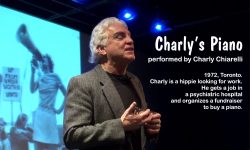 NEWS March 14, 2020. The Toronto Storytelling Festival has just been cancelled, due to Covid-19 concerns.

Charly Chiarelli has been invited to bring the Artword Theatre production of Charly’s Piano to the 2020 Toronto Storytelling Festival. So Ron and Charly and Judith will be on the road (not very far). We will do the Fringe 2019 version of the show, with projections. Our date is Tuesday March 24, 2020  at 8:30 pm.

The venue is the Alliance Française, 24 Spadina Road, one block north of Bloor in Toronto: https://www.alliance-francaise.ca/en/culture/events/toronto-events/special-events/toronto-storytelling-festival-2020-en 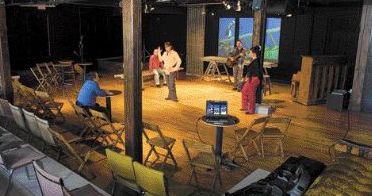 For those whose energies can’t be contained by just one creative activity, there’s the idea that the individual arts (painting, music, writing, etc.) make up a family. The potential of each is best fulfilled when it comes out of its separate room to interact with the others.

Theatre, film, opera, stage shows — collaborative forms of all kinds — appeal to the integrative impulse of the most ambitious in the arts.

Ronald Weihs and Judith Sandiford know it well. It is, in a way, a basis for their relationship. She’s a visual artist and set designer. He’s a playwright, director and producer.

Together they were living their vision — an alternative, multi-stream laboratory of theatre/art — in the old garment district of Toronto. On Portland Street. They ran plays, arts shows and some publishing projects (Artword magazine) out of a performance/studio space in a renovated factory — a 30-foot span with no pillars, with 16-foot ceilings, sprung dance floor, raked seats, a 70-foot long building.

“No one believed we could have such supportive landlords,” says Sandiford. “They respected how hard we worked.”

They were highly thought of and staged many popular productions, both their own and the work of other groups to whom they rented space, such as the African Theatre Ensemble. They did Allan Merovitz’s If Cows Could Fly, Weihs’ Sur (based on Ursula K. Le Guin) and Cu’Fu, by Hamilton’s own Charly Chiarelli. Much more. Not to mention the numerous art exhibitions.

Then, in 2006, their landlords, helpful as they’d been, could no longer resist market pressures. They sold the building to a condo developer. The new owner gave them four months’ notice.

“We locked up the back doors of a 48-foot trailer and drove out into sunset with our theatre and art gallery in it,” says Weihs.

This weekend Artword kicks off its first season in Hamilton, at The Pearl Company, 16 Steven St. When Sandiford and Weihs went looking for a new home, they scoured the MLS listings of the GTA, but one day they literally turned around on the QEW, came to Hamilton and ended up putting an offer in on a building.

That offer didn’t go through, but instead they found a house on Prospect Street three times the size and half the price of anything they’d been looking at in Toronto.

And then they found Gary Santucci and Barbara Milne, who own and run The Pearl Company, another renovated factory being used for the family of the arts, this one in Hamilton. So, they decided to use that space.

“We thought we were unique,” says Weihs. “But here in Hamilton there’s a couple as crazy as we are.”

So the vision continues. Sandiford and Weihs have assembled an ensemble cast for the musical You Are What You Do. It’s a new play by Weihs, who has written many over the years, including The Beavers (an Aristophanes-style satire), The Wobbly (with George Luscombe) and Highball!, a musical about logging, which he toured through B.C. logging country in the ’80s. Sandiford, whose art draws on themes from physics and cosmology, has helped create an innovative set with graphics for the unique stage.

You Are What You Do is a theatrical collage of stories based on the lives of working people. It previews tomorrow, opens Friday and runs to Oct. 26, with shows Thursday to Saturday at 7:30 p.m. and Sundays at 2 p.m. …

“We believe in a theatre that is full of fun and theatricality while it deals with things that matter.” says Weihs.

The approach, a tad Brechtian, is more horizontal and involving of the audience than conventional theatre.

Are Weihs and Sandiford part of the Toronto wave, attracted by affordability, which Hamiltonians have come almost coltishly to expect as our salvation? Well, there are Sky Gilbert, Ian Jarvis, others. Wave? Not yet. Maybe something between a smattering and an influx. But we’re glad to have them.